After weighing up the merits and pitfalls of the head tube option Paul mentioned the Mosquito with it's 4 bar rear. Here I've modified it to get the riders weight more within the wide part of the area covered by joining the three contact patches of the tyres. I've also used a narrower top bar. This has the benefit of moving the riders C of G more to the outside on a corner than a long bar does. I'll need to be careful with body to wheel interfaces with this but feel I've left enough room. Because of moving the C of G further it can be narrower but only to the point of not hitting the rider with the tyres. Again I can use the rear suspension of a kids mountain bike on the front. In doing so I am requiring very little play in the pivoting parts and may have to mod the pivot of the triangle to a pair of quality rod ends if the std system proves too sloppy.
I have added an "X" at the back (the dotted white line) as a stop to prevent the pivots of the 4-bar from going over centre. This system can not be allowed to do that as it would never recover without stopping and getting off. This system will allow me about 30 degrees of lean which is more than a wide top bar will give. 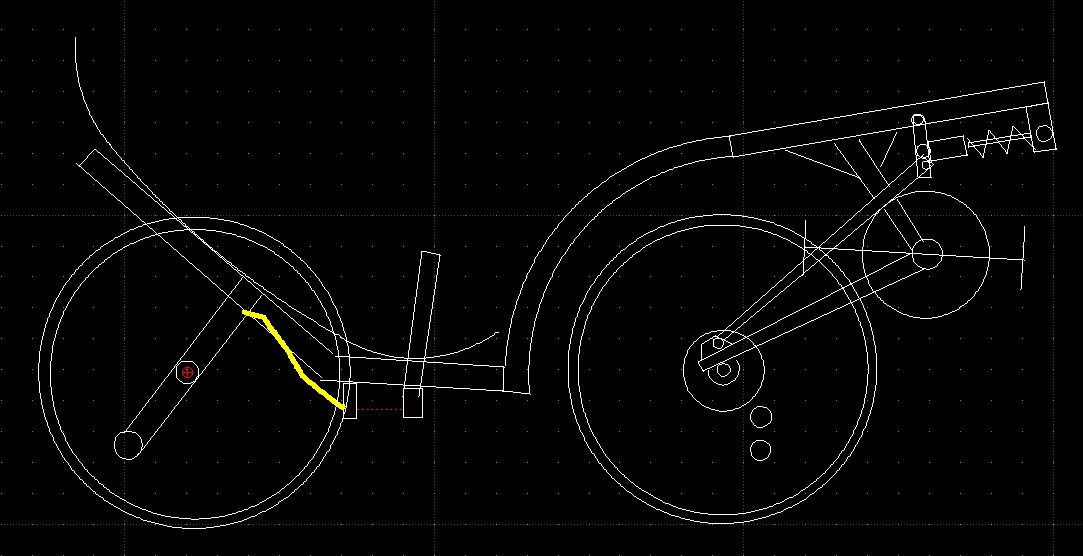 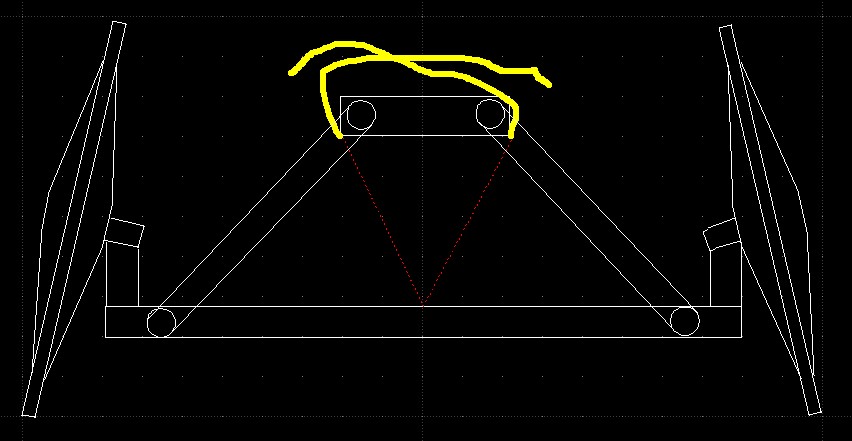 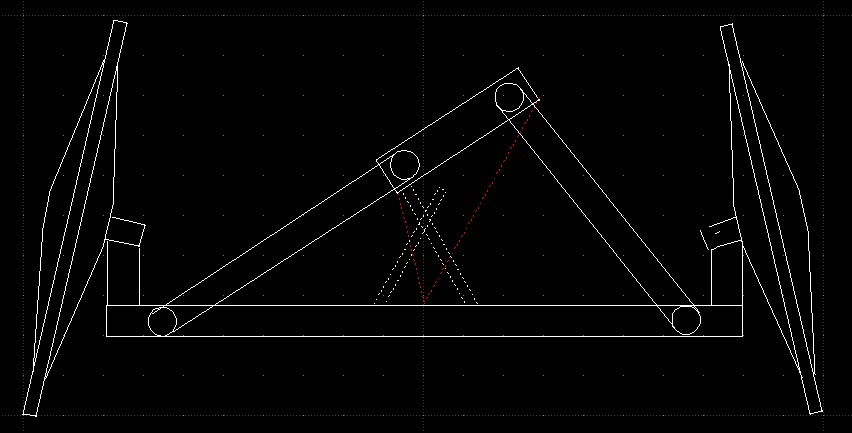 Not sure whether it'd be best with or without front suspension. 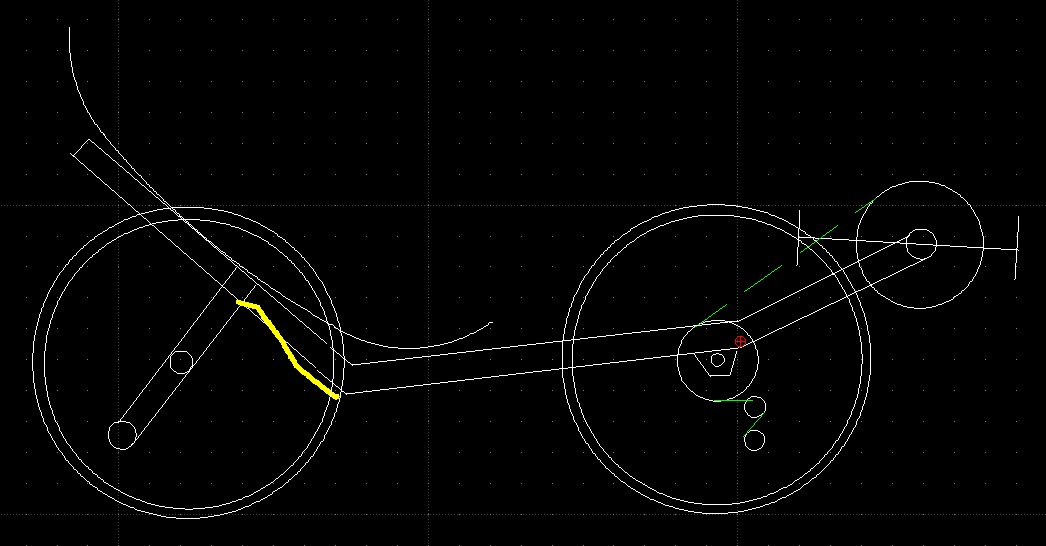 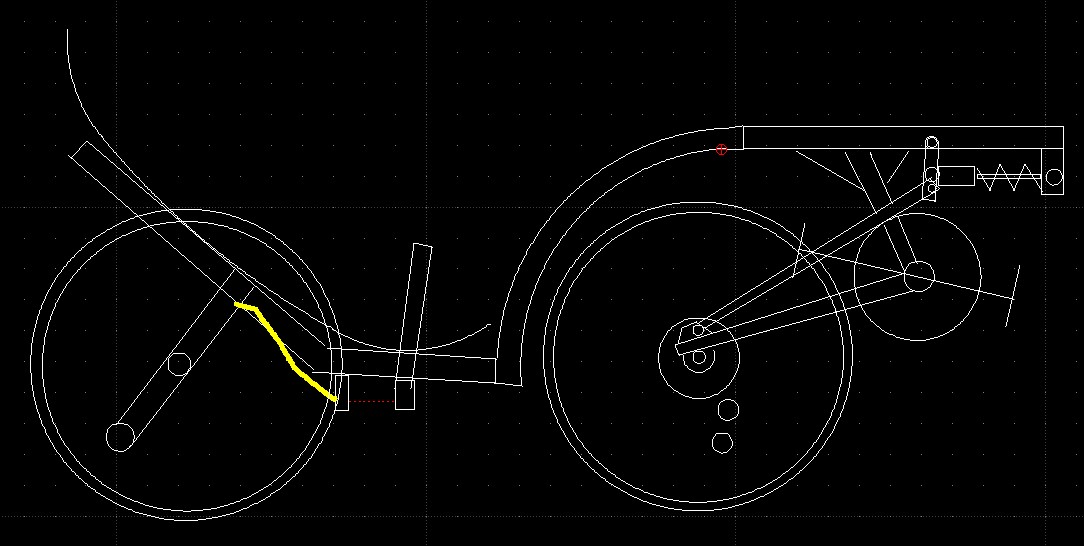 Suspension doesn't add that much weight as you might think as it allows the use of lighter tubing from the donor rather than the heavier front end I'd need to make to hold the front wheel. Maybe 2kg extra top. It requires the pivot for it to be good enough to eliminate wheel wobble. My best guess is it'll be fine without resorting to rod ends. It certainly looks different though I'm unconvinced it looks good. It has that Mad Max look about it which either looks cool or Heath Robinson depending on your perspective. It also adds in a built in crud catcher and family jewels saver as a part of the design though these can easily be added to the non-suspension design.
S

The Mosquito has a couple of things I would not be happy about ?

Trail and cast angle have been set to provide stability for all riding conditions. Because a velomobile can be faster than any other kinds of bicycles the turning radius has been increased (low cast angle) and the sensibility reduced (high trail). A mosquito will NOT steer too far and overcorrect a lean, thus weaving back and forth at increasing amplitude.

The mosquito is NOT like a normal tilting trike, the leaning angle is less than 20deg.

4,5m turning radius which is like around 5,5 wall to wall.

Just not practical for the rides I do daily

Does the second drawing down have the pivot near the BB missing and so cannot have a suspended front wheel ? on the pictured donor it is behind the BB ? 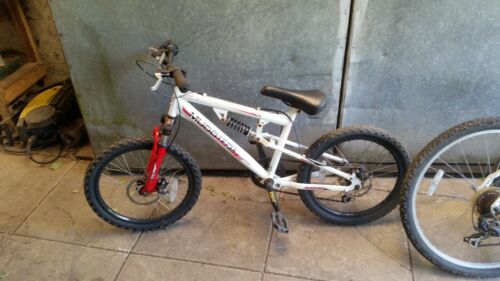 Yes the pivot is missing from my CAD efforts. It should indeed be there or it won't work. CAD was never my strongest suit hence the amateur efforts at it.

The Mosquito can only muster 20 deg or less due to its longer top bar. By shortening it it goes a bit further but will struggle to ever get above 30 deg at best. It's just a function of the design. There's also a trade off between getting between the rear wheels and having to lift the rider higher to do so. On one hand you win and the other you loose. Being 10" off the floor as opposed to 4" moves the C of G higher but gets you more twix the wheels. It's very short as deltas go and as such should steer well (caveat alert) within the limitations of the design. It'll never match a python or traditional LWB delta for turning ability. None of my trikes are daily workers as your python is so some foibles are tolerable.

With or without suspension it's fairly easy to build. There's nothing that ought to stump any regular builder. I'm just not sure if this is the design I'm going to build or do a more traditional LWB delta or even a python.

A couple of alternative front suspensions:-
This one has the suspension uncomfortably close to my 'nads..... 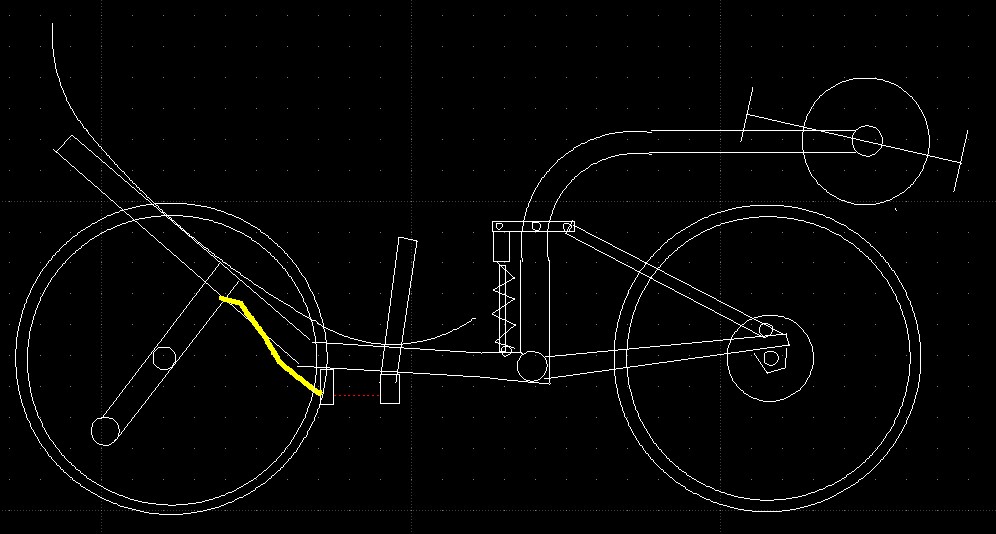 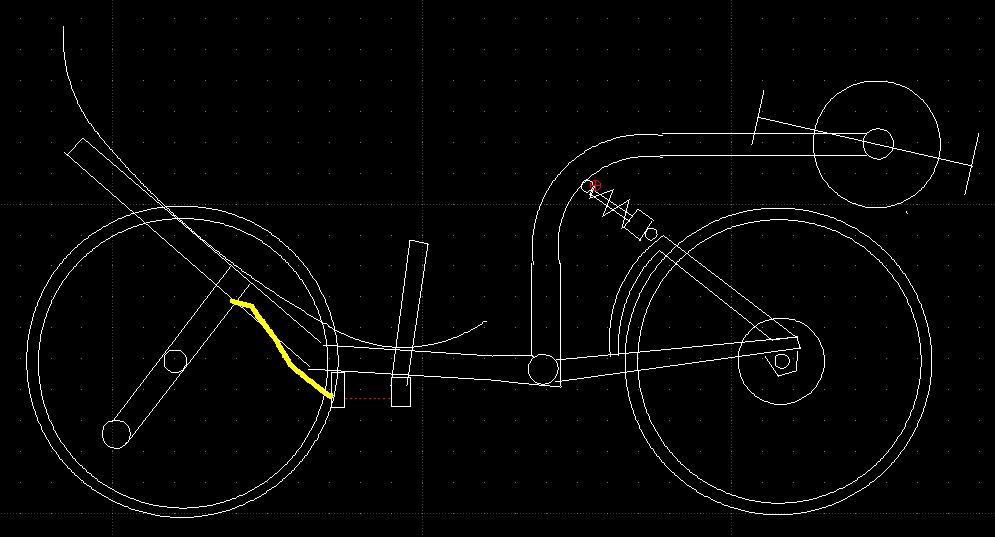 Both work on a leading arm which is rarely ideal. Trailing arms are much better for stability. Both look a lot neater though. I'm really tempted by the last one and swapping the std pivot for rod ends is relatively easy on this design
S

Why do the vertical arms angle forward ?

If you wanted to sit further back could you not put the rear wheel axles into a couple of horizontal frame members that were long enough to reach the rear tyre at the back ?

This would move both the bottom and top 4 bar pivots back 10" for a 20" wheel ? enabling you to sit closer to the axle nearer the trikes widest point ?
Regards Paul ...so many bikes to butcher and so little time ....

I understand your thoughts there Paul and I did initially CAD it out in a similar manner. I even thought of using the forward reach bars to the rear wheels as leading arms for suspension at the back by simply triangulating in a suspension unit. I came to the conclusion that it wasn't really necessary as I can get the rider far enough back at 10" seat height which isn't exactly monster truck territory. If I wanted to get the very best handling characteristics then I agree that such a move would be needed. It would add extra weight though. Such forward reach members would need to be stiff enough to prevent any wheel wobble and forward reach is already at a disadvantage over trailing reach members in such a respect. The forces would then also not run through the tubes but instead through the weld for those members. Some of that can be triangulated out but that means adding even more metal. There's also the point that sitting very low between the wheels, whilst brilliant for handling, does turn the rider more into those wheels as it leans. It may mean having to widen the track. At the current seat height the rider is turned more to the very top of the wheels only with important bits like head well clear. I don't think there's a massive issue in this respect and certainly not an insurmountable one but it's just one extra point in keeping it as is.
It is possible to lower the height of the 4 bar link to claim some of that seat height back but going lower reduces the leaning capacity.
In short I thought raising the seat 6" from 4 to 10 inch was better than adding the extra weight needed of the members to join the wheels that way and also the potential for rear wheel judder such a system could exhibit.
S

have you seen this ?

Some dimensions and it works !

and in English https://translate.google.co.uk/translate?hl=en&tab=wT&sl=fr&tl=en&u=http://velorizontal.1fr1.net/f10-le-coin-du-constructeur-amateur
Regards Paul ...so many bikes to butcher and so little time ....