My first trike, my first recumbent, the first welding project I've tackled in...30 years? My Covid project.
It's also been many years since I've posted on a forum, so...uhh... pix...well here's a link to the google photos album

'Broadsword' is an inside joke.

I went with 14ga tubing, and I had a big chunk of 3/16 steel plate, so all of the flat stock parts are extra solid. My welding started out pretty dicey, but I got the hang of it again after a bit. Rarely made a stack of dimes, but at least I got past the 'pile of split peas' stage in my re-learning. Using an old lincoln Wolfpack 100 wire feed flux core unit, so I had to learn how to gain control of the splatterfest it likes to create.
Some fun times:
Built the bottom bracket assembly. Backwards (doh!)
Built it a second time. ALSO BACKWARDS.

3rd time was the ticket.
Thought (too much, in all probability) about the axle shim. Ordered some 20mm OD 2mm wall tubing to make nice shims (5/8 grade 8 bolt is 15.8mm). When it came in I discovered that factory tolerances differ. Who knew right? Said 20mm tubing would not insert into a Sun Ringle Demon hub...until I inserted the tubing onto a 5/8" drill bit, taped it down solidly, and spun it for a bit into some 120grit sanding screen in my hand. Machining things is NOT my normal trade.
Seat is a variation of the original plan. Used 2"polyethelene foam (closed cell, very stiff) and cut the contours into it. Then covered that with 1" neoprene, which is so soft it's almost runny, and also closed cell so the seat doesn't soak up rain. Then covered that with some thin polyester fabric to protect the neoprene from tears.
Anyway, she weighs in currently at 60lbs exactly. My first test ride tells me I have a bunch of minor tweaks to brakes & such as expected, and a whole bunch of leg strength to regain

Thinking this unit is a great candidate for a motor...

We feel your pain, probably isn't a single one of us that has not done all of these things (and more) but perseverance (as you have discovered) is key to getting an enjoyable ride-able trike at the end of it.
Congrats on creating a working trike.
E-Assist is brilliant but you have to watch out that it doesn't end up doing all the work while your leg-muscles wither-away (don't ask how I know).
Regards,
Dan.
Mig = Weld, swear, grind-off & repeat.
TIG = Weld, admire, clean up, use.

No pictures are showing for me. Could be it wants me to sign in to google or it could be the myriad of privacy options I run.
S

Popshot said:
No pictures are showing for me. Could be it wants me to sign in to google or it could be the myriad of privacy options I run.
Click to expand...

No it is not you [ this time ] there are no visible pictures
Regards Paul ...so many bikes to butcher and so little time ....

Handle every stressful situation like a dog. If you can't eat it or play with it, pee on it and walk away.
T 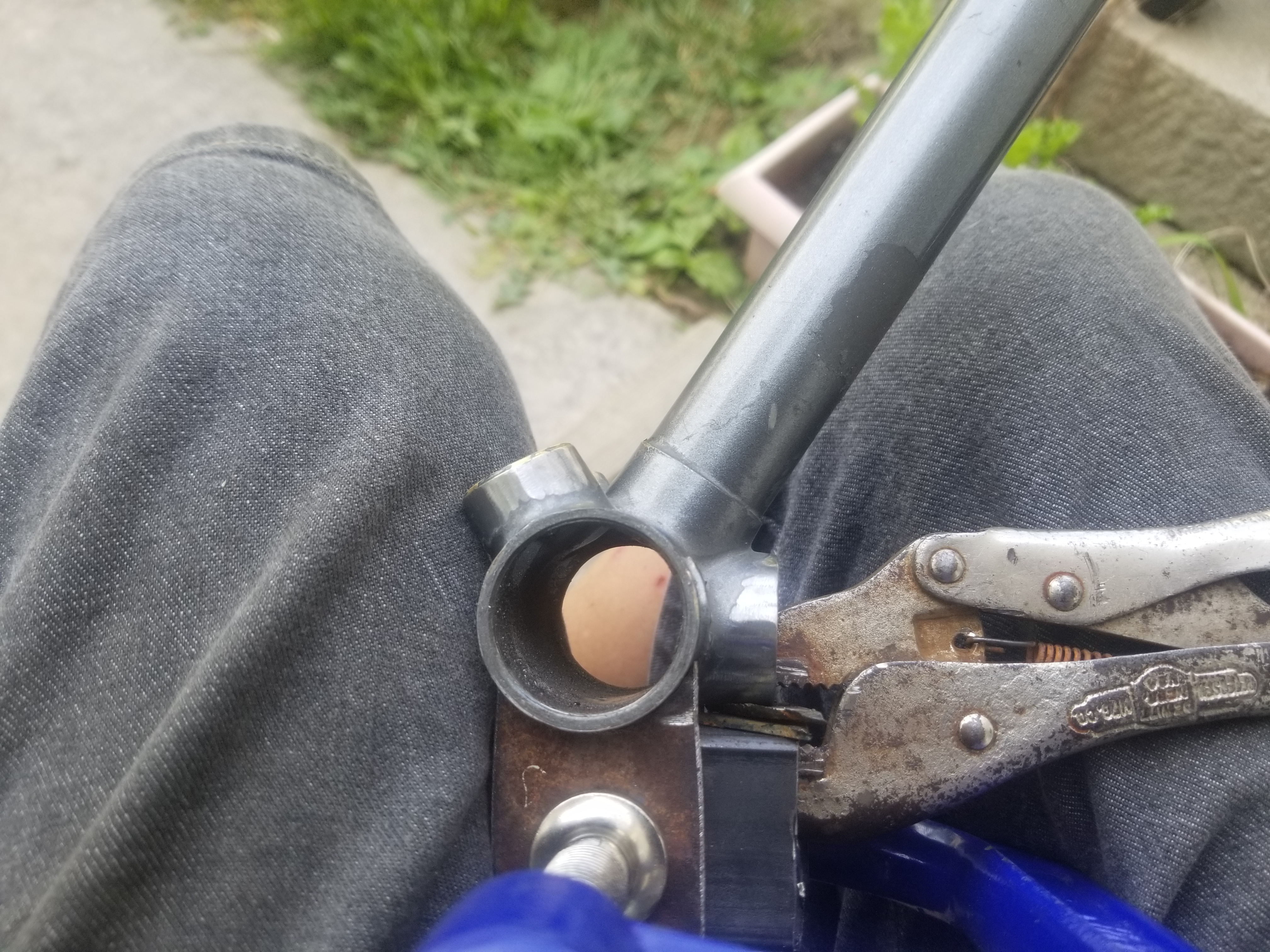 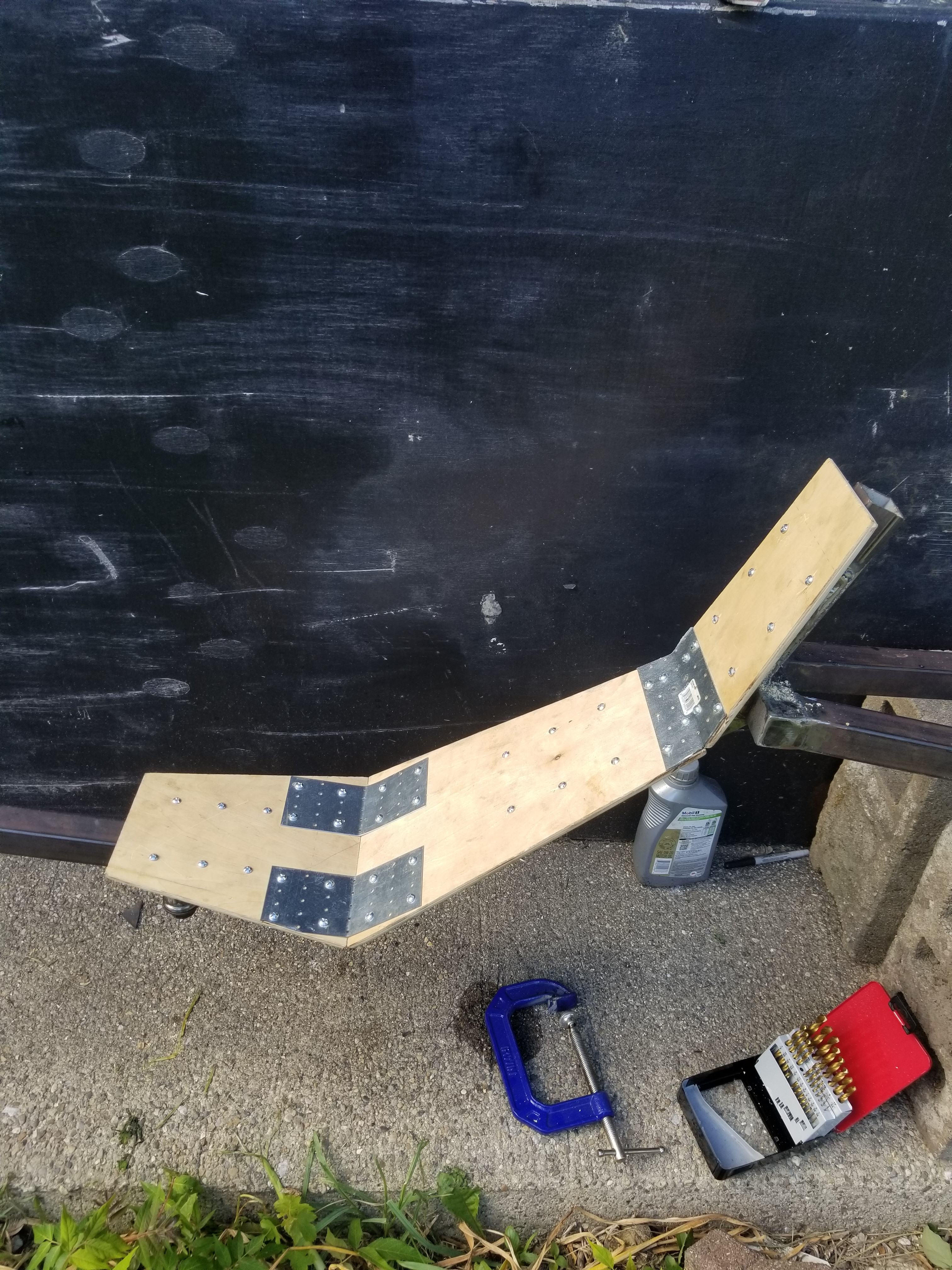 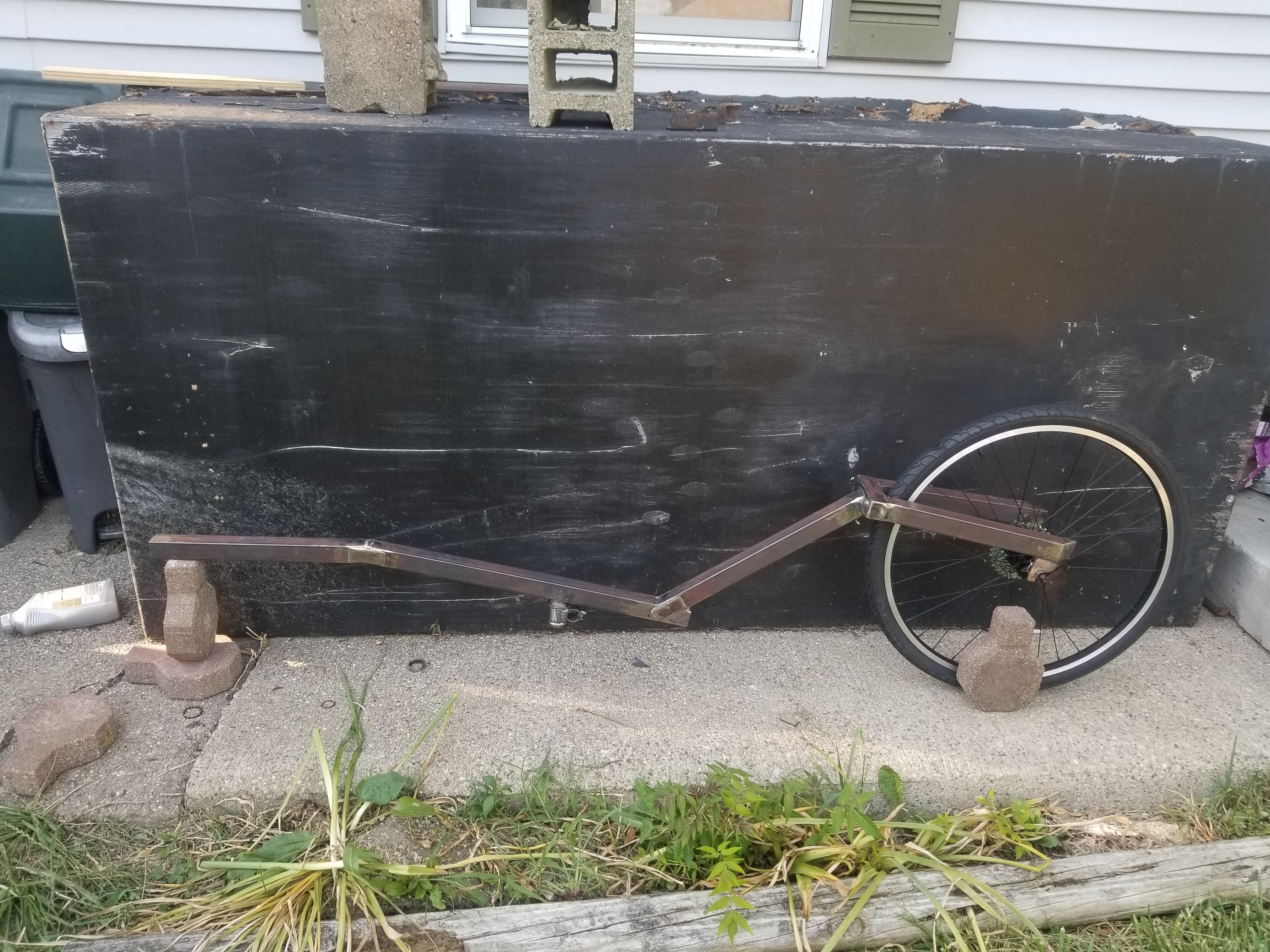 Ty, it was an experiment that seems to have worked out. After a few rides my neck & legs get exhausted, but my back feels great!
S

If you right click image and copy ' Copy image location ' when you paste that into the mountain symbol above you can get this ?
Regards Paul ...so many bikes to butcher and so little time ....

Handle every stressful situation like a dog. If you can't eat it or play with it, pee on it and walk away.
T

So, as is the way with our projects, it has evolved...Broadsword was promptly renamed "LegDay".
Then came the motor I thought I'd probably incorporate. And a bunch of associated thingies.
Currently it has front and rear turn signals, rear red light LED strip, headlights, mirrors, rear fender that can double as a 2nd rider seat, cargo baskets, and a cheapo Voilamart 500W 36v motor system (seemed like a good fit for my already existant greenworks 40v lawn tool batteries, in retrospect, it was).
Initially the motor rig was only slightly better than just adding it's weight and having a 100lb trike rather than a 60lb one. Turns out, my controller was a factory dud. They replaced it, and HOLY ****!
Now the trike drags itself and my carcass to 25mph by motor alone, with pedalling I can easily hit and maintain 30....
which leads me to my first slalom turn rollover...
Yeah...
2of10, do not reccommend. 15 minutes of bleeding from the head while I scanned the road with a flashlight to find my glasses, then resume getting home

. Pavement-to-forehead under aforementioned carcass/trike assy at 25mph or so is pretty sucktacular. Thank god I made myself a carbon fiber bowler hat so long ago, it took the brunt of the weight/scrape.
Nonetheless, after repairing/replacing the baskets, mirrors, and re-welding the right front steering knuckle that broke in the crash, LegDay remains a pretty glorious ride.
Now I have (maybe?) learned to ride a touch more conservatively, and have been exploring using the motor as "assist" in an effort to continue growing my leg strength and enjoying the ride. Nothin like a blaze of gory to remind one that there are limits to be respected, right?
Next up, improvements to mirrors & headlights, adding a brake light switching system to it, and I'm thinking of adding LED undercarriage lights to increase my nighttime visibility...I am an audio engineer by trade, and have been taking LegDay as my ride to local briefcase gigs, so I'm frequently running home in the wee hours.
Thanks again to AZ for the plans that started this journey!
T

This is a quick snap of LegDay upon return from tonight's gig. Other side would've shown my laptop bag & soldering iron hanging in the fold out basket on that side, this side fold out basket was not deployed
T

Steering is a wee bit twitchy, to our steering gurus: is that likely to sharp (approaching vertical) of a head tube angle? Sorry that I don't know the correct terminology, but I'm learning as I go

It is hard to see from the rather small and dark pictures ? however you seem to have underseat steering ?

It is possible you just have a bit to much steering movement for the amount of handlebar movement ?

It would be nice to see a underside view showing how the handlebar movement is translated into wheel movement ?

Gut feeling is you only need to have some new holes decreasing handlebar/wheel movement ratio a bit.

I am sure a bona fide tadpole builder will come along shortly and correct me
Regards Paul ...so many bikes to butcher and so little time ....

Trackzilla said:
Steering is a wee bit twitchy, to our steering gurus: is that likely to sharp (approaching vertical) of a head tube angle? Sorry that I don't know the correct terminology, but I'm learning as I go