MrIdaho said:
I often wondered if a tapered bearing would be better suited seeing how the wheel is supported ONLY on one side.
Small tapered bearings are available.
A ball bearing is designed for rotational loads, not sideways.
Click to expand...

It's not too late to change things. But it would have been nice if these valid points would have come up earlier.

Be that as it may, I can redo the whole spindle set up (at a later time).
The reason I went with using a head tube, ( I repeat myself here) is that this project started out to be a tandem bicycle build.
Thus not requiring the same load concerns as the present configuration.

I also thought that using bearings vs. no bearings would make steering easier.
If they really aren't that necessary then maybe something along the lines of the example below could be fabricated. 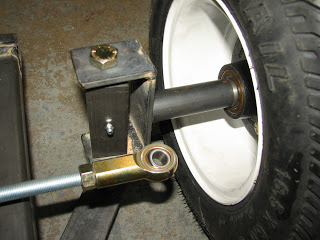 I could remove the bearing races, weld a top and bottom onto the headtube (with predrilled king pin holes).
I can make it adjustable for camber while I'm at it.
Make the 'U' bracket that would attach to the axle, and have a disc brake mount as well.
I think I could use my existing tie rod arms as well.
Like my drawing above. #698
Enjoy
Ed

I had to take a break from this, while I pondered what if anything I should do about the front spindle situation.
I did look at it with serious intentions of reworking the whole set up.

But after much thought about my main goal, I have decided to keep going with my original design. I'm confident that for the intended use, the present design will work. I will at a later time, re-address this issue and a design change.

The heat has kept me out of the shop, recently. It's averaging around 103-107 (F) inside, so I get pretty worn out and need to get in where I can get cooled down and hydrated.

In the last few days, I've been able to make new stronger caliper mounts and a trial fit. 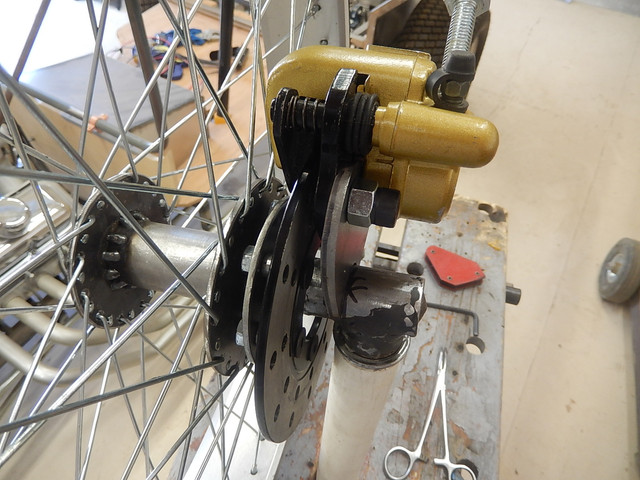 The first mounting position wasn't quite right, so off it came. Also discovered that the disc adapter was not true. So I spent a considerable amount of time, with a 'persuader', gently love tapping it until it behaved and fell in line.

Next, I needed to address yet another out of alignment issue. The 1/2" spacers I made were themselves not very true in length. So I abandoned that method and cut out a woodblock, which I cut in half to form two spacers.
Worked first time out. The disc and the caliper mount are parallel with each other.

There's virtually no out of line movement. But, I haven't finished truing up the wheel, so that may pull something out of alignment. 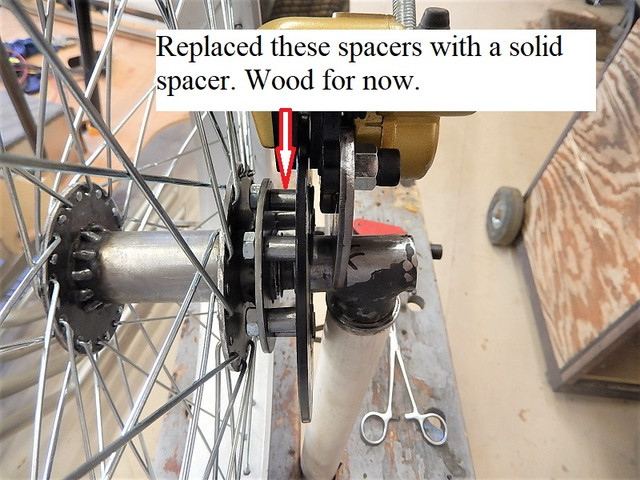 I would like to replace the wood spacer with an aluminum one.
As pictured the disc brushes against the outer pad ever so slightly. Maybe just enough to help seat itself when the time comes to adjust them. There isn't any discernable, 'gaping' while turning the wheel. But if need be, a shim may be required where it bolts to the mount. 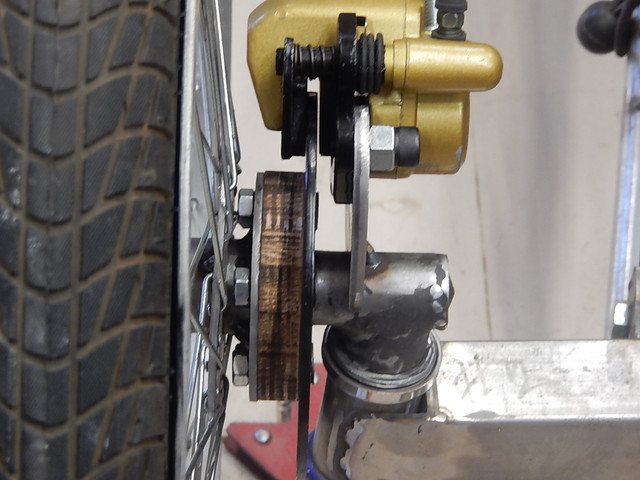 But for now, it's like a tack weld, temporary so the project keeps moving forward.
Hmmmmm...I might tack weld the nuts to the disc adapter. 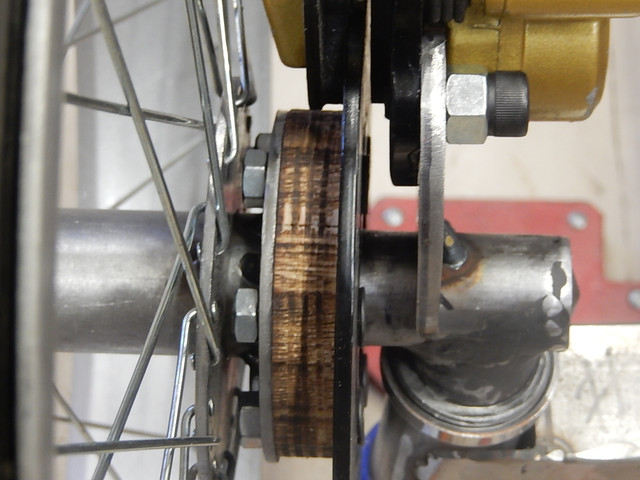 If wood makes a satisfactory spacer, a disc cut from a kitchen cutting board, the plastic or nylon types, might make a better one?
Kevin - VK3CKC
https://groups.io/g/pedalradio
https://axerail.coffeecup.com/index.html

vk3ckc said:
If wood makes a satisfactory spacer, a disc cut from a kitchen cutting board, the plastic or nylon types, might make a better one?
Click to expand...