How much do various AZ completed bikes weigh? Assume 1/16 thick steel tubing used. If different gauge used please state that. '
especially interested in trike weights. I can calculate weight of frame easily but unsure how much all the parts add up to weigh.
Yes I know this will vary if you use a wood seat vs a aluminum seat, etc, but I want to see how light members have managed to make them.

Commerically made trikes that use the recommended heavy duty wheels and steel frame are around 65 lbs.''I did a search and no results, probably discussed in old forums.

Although I don't normally weigh anything, I did put the heaviest trike (Viking) on the scale...

78 pounds fully loaded, which works out to 39 pounds of trike per rider... not too bad.
Not sure how much my Warrior weighed, but I could lift it overhead with one arm easily.

That's actually not bad at all, IMO, for such a long & beefy trike!
I've always wanted to build this one. Still do, for that matter.
Just not likely I'll ever get to at this point.

Thanks brad for weighing that tandum. if you ever get time to weight your other machines I think it is very very usefull to know. My guestimate is a street fox is around 50 lbs, curious to see how close I am. I calculated the metal square tubing to be 138" or about 15 lbs. Even if I made it out of aluminum it would only save 7.5 lbs. of weight. I guess the commercial aluminum trikes probably have tie rods, wheels, seat, and any hardware be aluminum as well to get the typical 30 lb weights.

This one was 29.5KG - 65LB. The seat was particularly heavy being a piece of bent stainless under the foam. I used it because I had it. Using a lightweight fibreglass item I could probably have saved 3KG. Chassis was 40x20x1.5mm. The front wheels and tyres were fairly fat and could have been thinned down. I could have shaved a little off the steering tubes by making them shorter and lost 6" off the front boom at the expense of taller riders. There's a rear suspension unit - a light/short cheapo one which could have gone by doing away with suspension. Other than that I'd need to be buying expensive lightweight components. I reckon that by buying a lightweight seat or perhaps making a mesh one and being as weight conscious as possible without resorting to expensive parts it'd still tip the scales at 25KG+ - 55LB+ 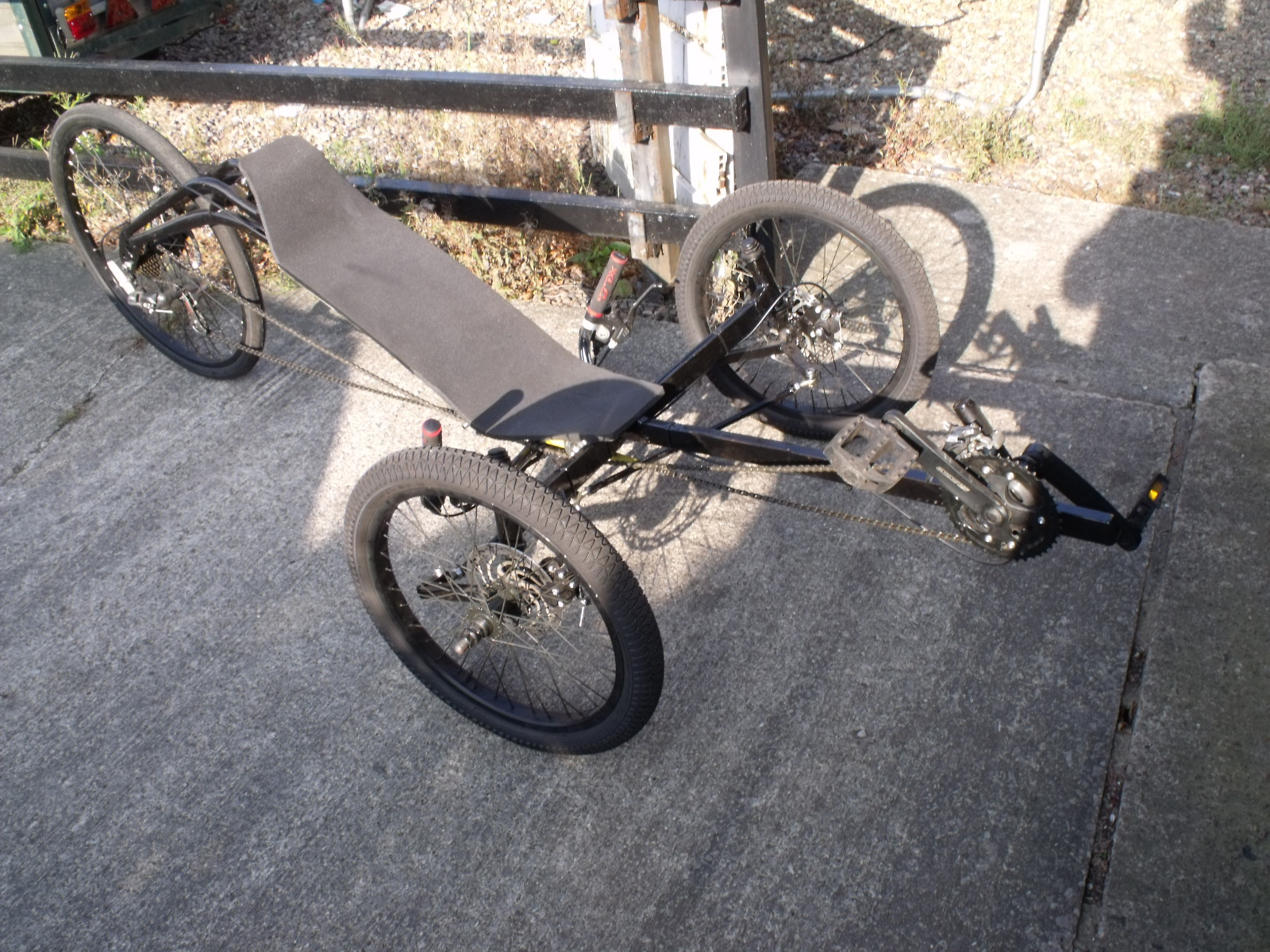 With virtually all alli components and a 9mm ply seat l have built a 20/20 Streetfox using 40mm square , a straight cross boom fitted with a 20" rear triangle ,disc front brakes and USS . It weighed about 47 lb until we added e- assist that took it to 75lb with 3rd brake , 36v motor and li-on battery . (The 26" rear triangle was a lot heavier than the 20" one )
It can't rain all the time

47LB must be somewhere near the limit without exotic parts and TIG welded 0.9mm tube.

even the front boom was trimmed down to allow 5 cm of extra movement and the seat post shortened . It can all be done .
It can't rain all the time

My 10 cents worth. Everything that the trike consists of must be propelled either by motor, your legs or gravity. It must also be lifted at some time if you plan to load it onto a trailer or into a vehicle. We are not all built the same with the same strength and ageing slowly takes it away from us.

If one had plenty of resources - staff, engineers, time, money, manufacturing and testing equipment - the very things that commercial manufacturers might have and charge you for, one could use them to shave every little bit of unnecessary mass to make the lightest trike possible. One could even calculate how much propulsion energy one could also save. All that adds cost and time to the build and you have to wait longer for the joy of riding. Then you load the trike up with bits and pieces that you think are necessary and enhance the riding experience such as tools, survival gear, etc. Extra mass means if you want to travel as fast as the lighter guys, you are going to have to work at it. Is there any great hurry to get there? I would shudder to think what my Warrior, and its add-ons, weighs in full flight. I don't really care as it is doing what I personally want it to. I might weigh it one day and then keep it a secret.

The new eLecTricks build does have some consideration for unnecessary mass but it still has to do what I want it to. Lessons learned during one's "building career" modifies our individual build approach. Then, we might become the experts that can set up a business with all the resources previously mentioned but I think too much time may have passed by. I think I know what I would do if I was able to have a re-run. There are many, many, trikes to be built.

Using what you have on hand (read saving costs) could also cause the build mass to blow out, but that's the way we do things, because we can, in saving the considerable add -on costs of commercial builds. If you want the lightest, you need to buy one.

If you make your first trike and it turns out to be what you think is a little too heavy, your second trike will probably be approached with mass conservation in mind. In the meantime, you have your first one to ride during the protracted build of what you think will be a lighter one.
Kevin - VK3CKC
https://groups.io/g/pedalradio
https://axerail.coffeecup.com/index.html

I'm not a fan of that steering type. Pushing/pulling left and right across your body just feels awkward. I'd rather have under seat, fore/aft or go-Kart steering. Nothing factual about that - just my personal preference.

The Venom is the flagship of KMX , You can always add USS if required , only problems I have heard of were under Laquer corrosion .
It can't rain all the time