May Theme - Mullets and Mayhem!

Each month I am going to come up with some kind of goofy photo theme and stick the thread until the next month.
My yard chores are adding up, and since it is raining today, I decided to get a jump on it.

May is Mullets and Mayhem Month!
Post retro photos of your mullets and early bike hacking attempts (good or bad).

I am going to start with a few Polaroids I just found in a box this morning while I was spring cleaning my man cave.


This is one of my favorite old pics from 1982, a recumbent trike hacked together from old ten speeds and a Chevy Nova car seat. It was actually a great ride, and I used it for several years. The trike featured a motorcycle battery under the seat that ran a 40 watt tape deck and a car horn. I would often blast 80's metal such as Judas Priest or Iron Maiden, while riding. I miss the trike and the mullet. 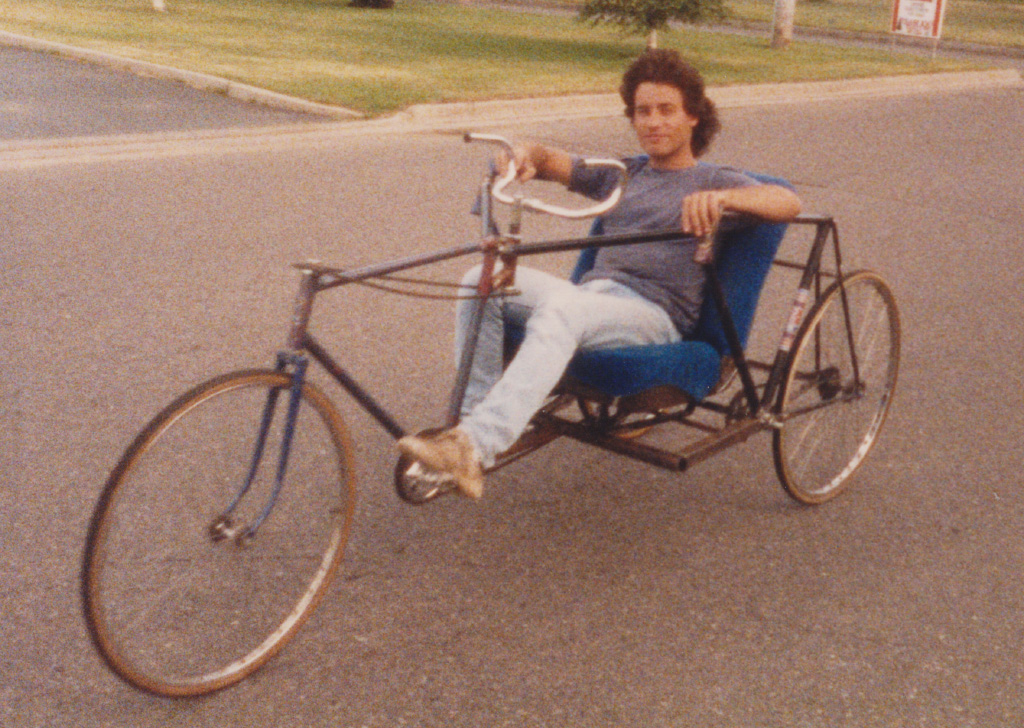 This next 80's pic is of a tandem I made from similar junk yard 10 speeds, and it was also a daily commuter for several years. Luckily, back in the 80's the combined weight of myself and rider was under 300 pounds becasue I had no diagonal frame truss tube on this one! Nonetheless, the tandem made it for 3 years, often making 100K or better rides out to the country. Mullet is hiding in the back, but it was still 24 inches of hair! 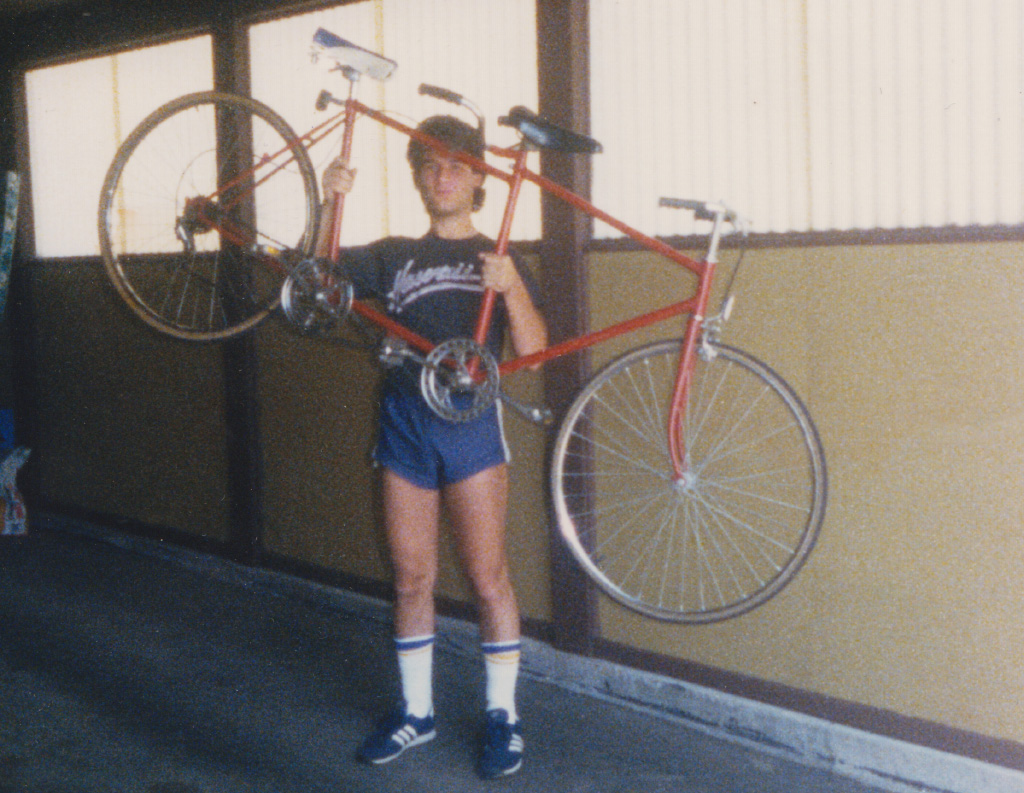 One of my better 1980's tall bikes, somewhere around 8 feet tall. It wasn't my tallest bike, but was the "safest" one I had for city commuting, which I often did. I built two of these, and we often had battles where me and another insane friend would attempt to knock each other off in jousting competitions. Back then helmets were only for those who did not have full mullets to break the impact of skull and pavement. 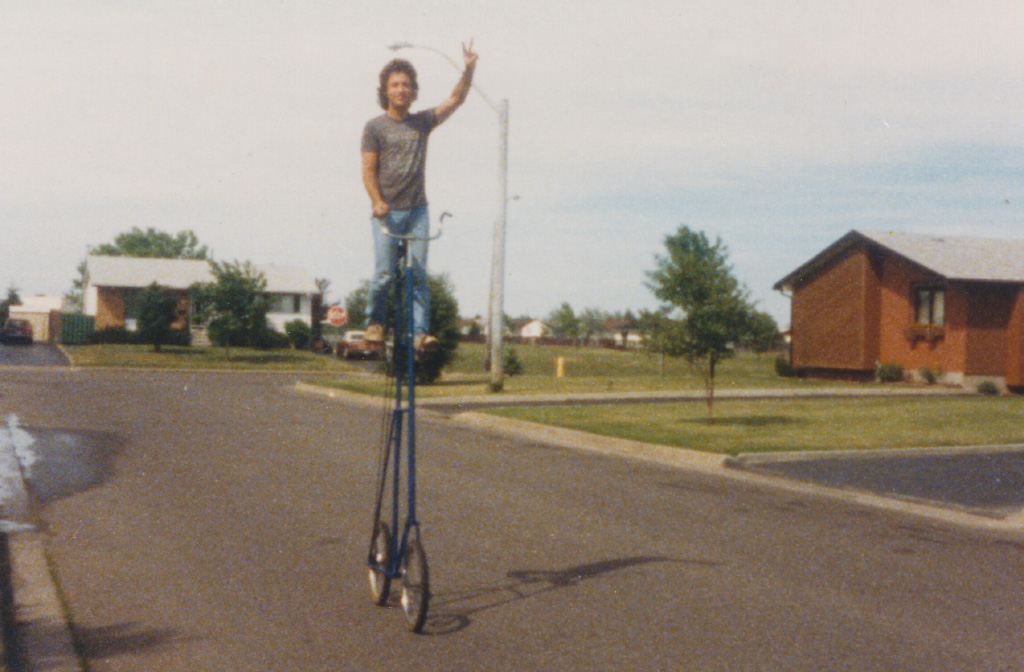 In the late 80's, my friends used to call me Rambo. Not sure why... I never had a machine gun! 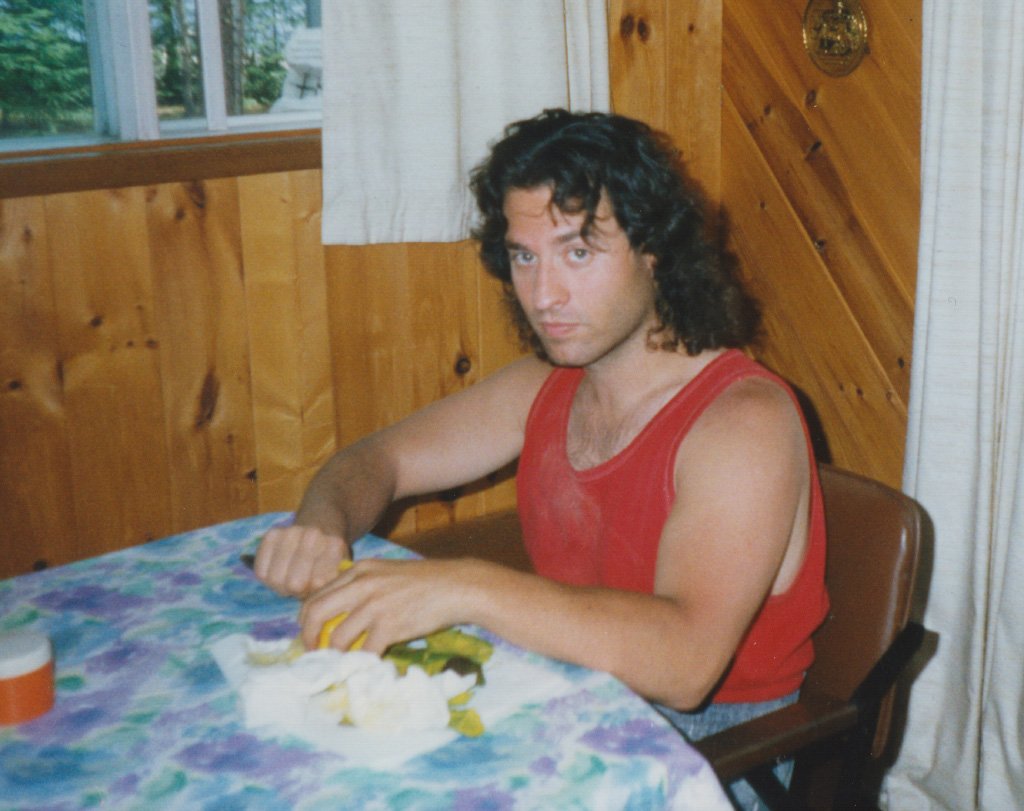 This one is more recent (1999), and although this might not constitute a full mullet, the bike is certainly a hack! I cobbled together a 10 rider trike from the enormous pile of scrap bikes I had, and it was fin to navigate the neighborhood on this 25 foot monstrosity. 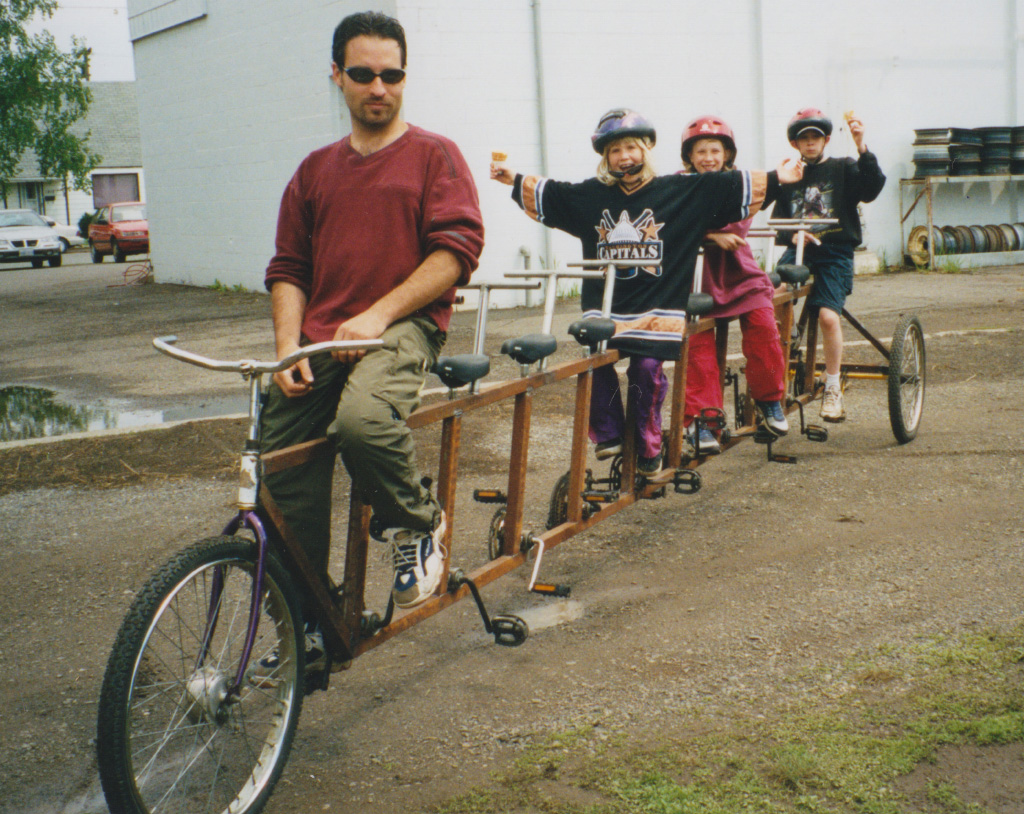 Ok, that is my Mullets and Mayhem post.
I dare anyone to post scarier mullets or bike hacks from their retro files! 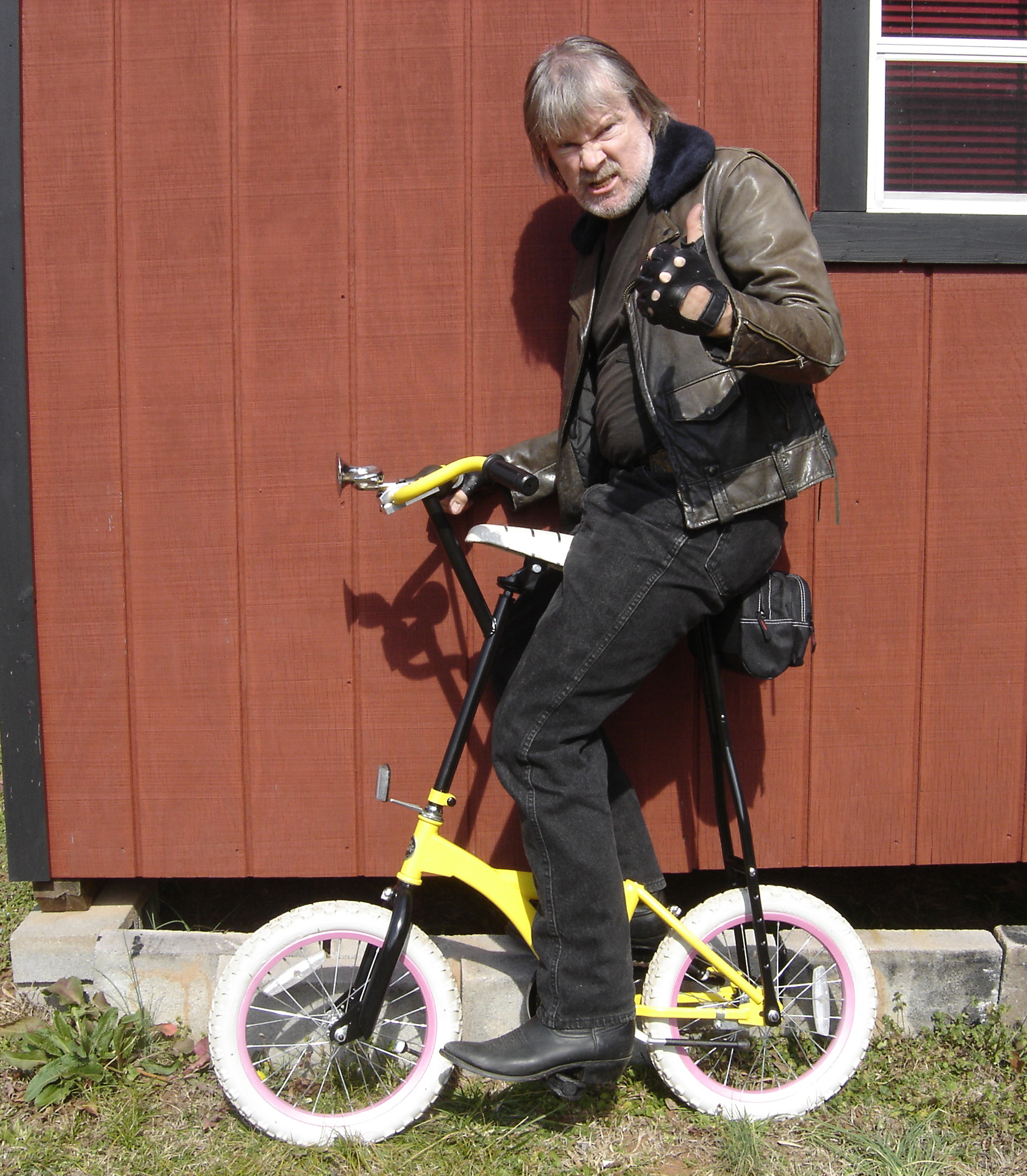 Yeah!! You look like a fully patched member, ready for whatever life brings!
Also ingenious the way you repurposed the original banana seat post clamp as a top bearing support for the extended goose-neck.

Brad: Did you have to remove the chain on that multi-tandem to make it lighter?
Kevin - VK3CKC
https://groups.io/g/pedalradio
https://axerail.coffeecup.com/index.html

That pic was taken on the initial test run, so I had my three stokers doing all the work while I attempted to get the beast around corners!
I did add all chains and eventually painted the bike bright yellow, but never took any more photos. Wish I did, so many crazy bikes never to be seen again!

Thanx! Extended gooseneck is attached to seat post clamp via a caster wheel frame & bearings. Works great! Not my design though.
My contribution is rear of seat being supported by a modified & painted crutch.
***
"Bent since 1985, but still not broken!"
Proud AZ Krew Member since June 25, 2007

When I was in my late 20's I was into different kind of bikes and hung out with a different kind of crowd.
Now I mentor robotic students at the high school and go to bed early. 10 grand kids to boot. LOL, I Made it full circle.

Last edited: Apr 25, 2019
Inspiring others to dream is my motivation. 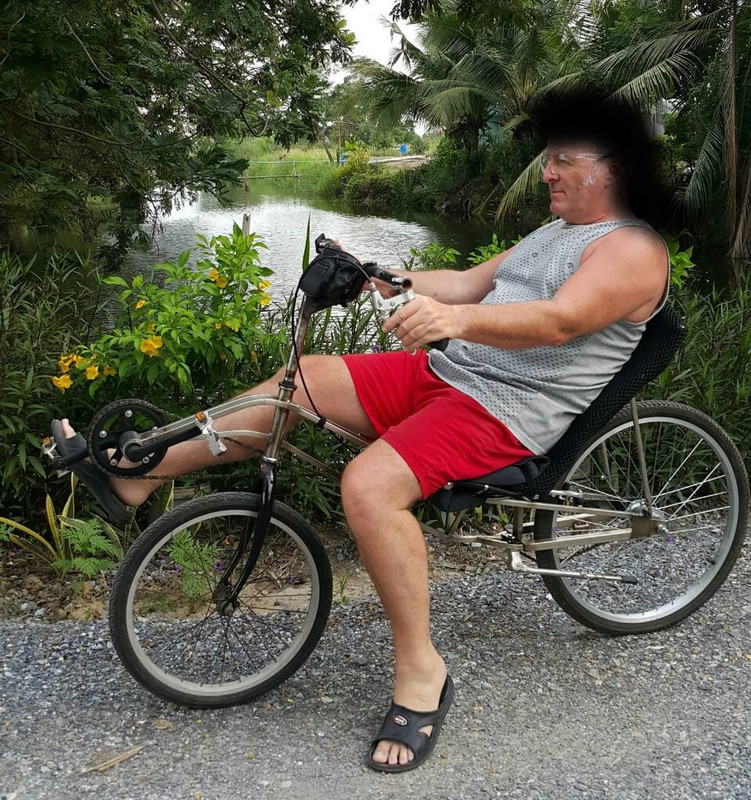 There was no implicit rule stating the mullet could not be photochopped, so it's all good!
The bike looks good, did the 3/4" square tube hold up to pedaling forces?

...the SWB build in itself was fine, some flex, but not in a detrimental way. The SWB format is not for me however, not happy with the higher BB compared to LWB and trike. No harm done, an itch that was definitely worth scratching, and most will be recycled onto another build....
You must log in or register to reply here.
Share:
Facebook Twitter Google+ Reddit Pinterest Tumblr WhatsApp Email Link
Top